With the NSW election now only 10 days away, the MSC held a staff meeting that attracted up to 280 people on campus in a last ditch attempt to counter three major shortcomings of the hospital’s redevelopment plan, including the ‘bed block bedlam’ currently wreaking havoc on the hospital.

The clinicians shared information with all staff members, ranging from senior clinicians to hospital cleaners, and developed strategies to counter the flawed $1 billion plan to upgrade RNSH.

The proposed redevelopment plan for RNSH will result in, at best, only 14 additional acute adult medical and surgical beds.
The extra ‘100 beds’ touted for the hospital by NSW politicians does not account for the current use of treatment rooms and transit lounges used regularly now to accommodate patients.

According to Dr Tony Joseph, Chair of the RNSH MSC, NSW Health, together with the InfraShore Consortium, as part of the Public Private Partnership (PPP), can fix this major problem now by adding another two floors to the proposed redevelopment, which will allow the hospital to accommodate up to 500 adult acute medical and surgical beds.” 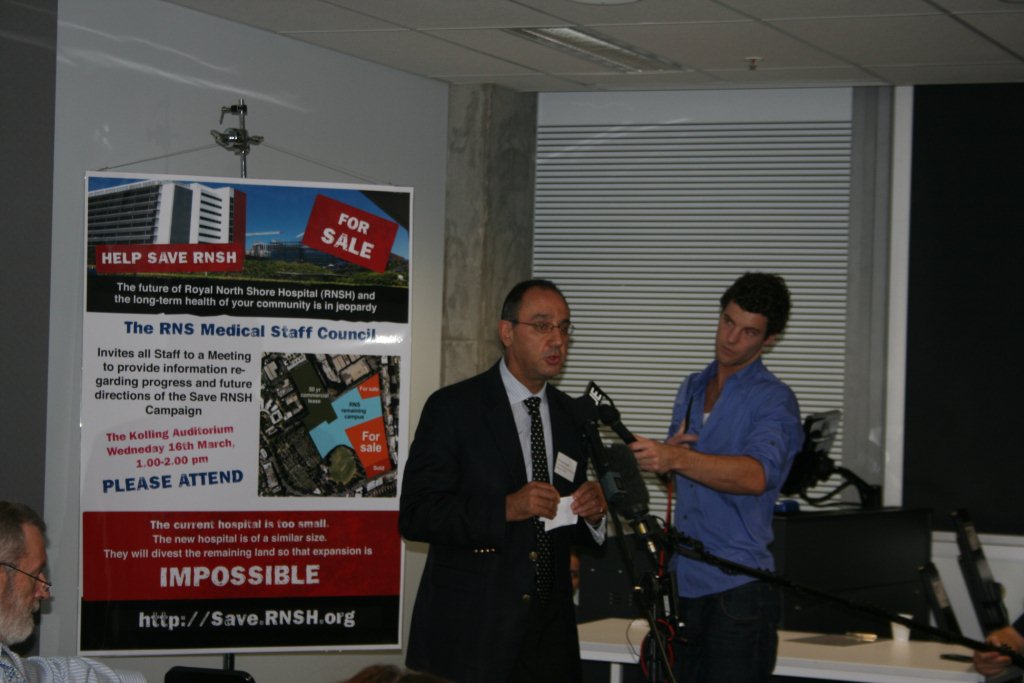 “The NSW Government’s decision making is absolutely flawed, misleading and illogical with respect to the number of beds planned for the RNSH upgrade. Their thinking abandons any semblance of clinical evidence but rather, entrenches inefficiencies and places patients at underserved risks,” said Dr Greg Purcell, Clinical Senior lecturer at Sydney University Medical School and Visiting Medical Officer in Anaesthesia at RNSH.

“It is astonishing and regretful that the multitude of meetings with NSW Health and their presumed exhortations of Treasury continue to fall on deaf ears.

“The NSW Government should admit that the initial planning for the hospital with regard to bed numbers is flawed and attempt to solve the problem,” Dr Purcell said.

What RNSH needs is more acute medical and surgical beds. It’s that simple.

More importantly, given the importance of RNSH as a major teaching hospital servicing one-in-six of the NSW population and one-in-18 of the Australian population, we call for the proposed divestment of more than 50 per cent of RNSH campus land to be halted now, as this will compromise the future expansion of the campus and fail to cater for the inevitable population growth.

“We call upon both major political parties to address this issue urgently before the state election (March 26). The future of NSW healthcare may well rest in their hands,” said Dr Purcell.

To help save RNSH, go to www.save.rnsh.org and sign the petition.